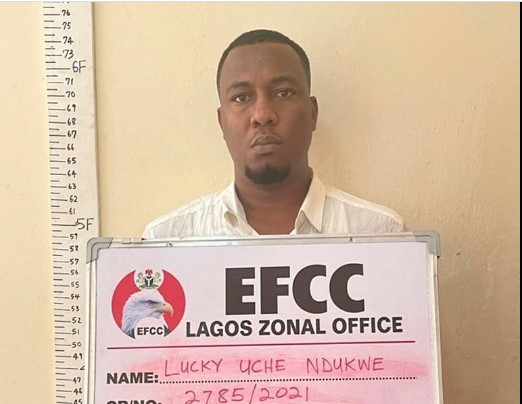 The Economics and Financial Crime Commission on Wednesday charged a Cubana Group executive, Lucky Uchechukwu Ndukwe, with a crime bordering on conspiracy to commit money laundering and money laundering.

Ndukwe, better known as the Cuban Prime Minister, was brought before Justice Justice OA Fadipe of the Special Offenses Court in Ikeja, Lagos State, along with precious Omonkhoa Ofure, by the EFCC’s Lagos Zonal Command.

The suspects were recently arrested by EFCC agents after credible information was received about their involvement in the fraudulent activity.

The items recovered from them include the amount of $164,000.00 ($one hundred and sixty-four thousand dollars), iPhone mobile devices and laptops.

The charge against the accused reads: “That you, Precious Omonkhoa Ofure and Lucky Uchechukwu Ndukwe, sometime in 2021 in Lagos, within the jurisdiction of this Honorable Court, colluded and laundered a total amount of $164,000, which is part of $ 256,314 fraudulently obtained through false pretenses from one Elena Bogomaz, a Canadian citizen, and the fraudulent money converted into US dollars with the help of a Bureau De Change Operator, which was then credited to the bank account of Casa Cubana Estate Limited and Lucky Uchechukwu Ndukwe respectively for the purchase of two and land properties and committed an offense in violation of Article 330 of the Criminal Code of Lagos State, 2011.”

Read also:  7 actions that can limit you as a creative

During their arraignment on Wednesday, Ndukwe pleaded “not guilty” while Ofure pleaded “guilty” on the charges.

The prosecutor’s counsel, MKBashir, reviewed the facts of the case and prayed that the defendant, Ofure, would be sentenced accordingly.

Judge Fadipe ruled that Ofure was guilty and sentenced him to three years in prison on two counts of conspiracy and money laundering, with an option to pay a fine of N2,000,000.00 and 100 hours of community service.

The judge also ordered the forfeiture of all items recovered from the convict.

Udukwe’s counsel Chuks Arubalaeze told the court about a bail request on behalf of his client.

Judge Fadipe also ordered the remand of Udukwe in the correctional facility pending the perfection of his bail conditions and adjourned the case until October 28, 2022, before the start of the trial.

I don’t take a movie role because of money -Uchemba