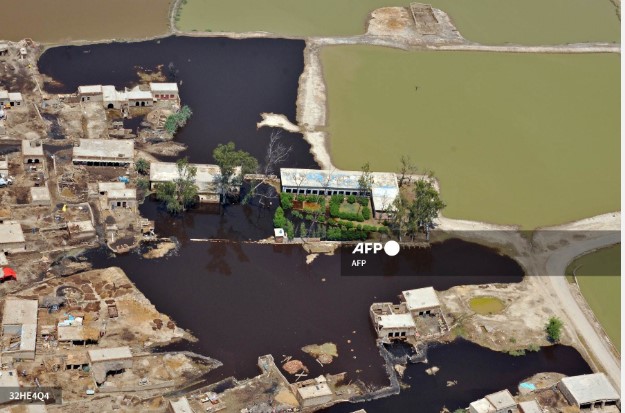 It was midnight when Yasmin and her family were ordered to urgently vacate their room at the Honeymoon Hotel, located above the picturesque ice-blue waters of the Swat River.

They had traded the sticky summer in Lahore for the cooler climates of the northeastern mountains last week when they were embroiled in one of Pakistan’s worst disasters – one that left more than 1,100 dead and a third of the country under water. by severe flooding.

In the darkness, they fled their hotel in the remote Kalam Valley.

Hours later, from the safety of higher ground, they watched as it collapsed and crumbled into the thundering water.

“There was chaos, everyone rushed to save their lives,” 53-year-old Yasmin told AFP on Tuesday after she was evacuated to Mingora.

“We heard a loud bang and then I saw the hotel where we were staying submerged in water. The sound of the water was so strong. It was as if something had exploded.”

Panicked, she witnessed the despair of a mother unable to hold her small child.

“The child screamed, but his voice was overwhelmed by the rush of water. His mother tried to save him, but she couldn’t,” Yasmin recalled, choking on her words.

The boy was one of at least 21 people in the area lost to the floods, mainly due to collapsed houses.

Reports of last Thursday night’s horrors have surfaced after tourists were brought to safety by helicopter rescues – the only way to access remote valleys closed by the floods.

The water has receded, but it could take days to restore road links to nearby towns.

Junaid Khan, deputy commissioner for Swat, told AFP that up to 200,000 people were cut off.

More than 600 affected tourists have fabricated the majority of evacuations — prioritizing women, children and the sick in an effort led by the military and supported by the provincial government’s helicopter.

About 3,500 food aid packages have already been delivered – some fell from the back of a helicopter as crowds of people reaching for the plane made it impossible to land.

The beautiful Swat Valley, known locally as the “Pakistani Switzerland”, is a popular destination for its majestic mountains, lakes and rivers.

Days after her first night of terror, Yasmin’s family hid in boarding houses farther from the swollen river until she could be rescued with her husband, who has kidney disease, and her 12-year-old daughter.

Her two grown sons stayed behind.

While tourists generally expected seasonal monsoon rains, they were surprised by the magnitude of the floods that swept through the area.

“I feel like I’ve been given a second life after arriving here,” Yasmin said from airport security.