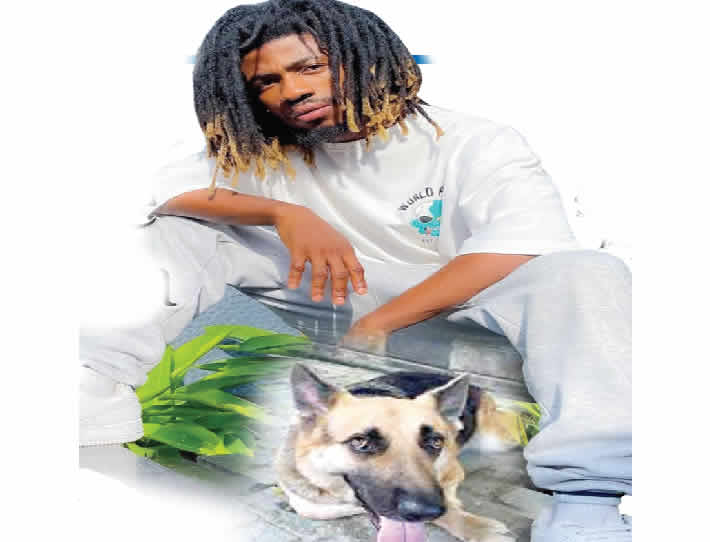 A singer, comedian and actor, Franklin Isika, aka Frankie Seeka, has 134,000 followers on Instagram. He tells BABATUNDE TUGBOBO about his career

When did you get into comedy?

I was always around comedians and content creators. I also used to write scripts. However, I formally started my comedy career in 2020.

What is the inspiration behind your character, Frankie Seeka; the boy, Kiriku; and the dog, Storm?

It just came naturally that Storm has always been the smartest when the story is about me. Kiriku is also a smart character, so I thought of a face-off between the two of them.

One of the recurring themes in your skits is when Storm tries to expose your character or take revenge for the evil you’ve done with it. What did that bring about?

I’ve always studied dogs, relative to the way they act. I have always honestly felt that they (dogs) think they are smarter than us (humans). For example, a dog will pull certain cute faces when they want something from you. As far as I’m concerned, that’s emotional blackmail. In light of that, I thought of a world where dogs would be more likely to prove they’re smarter than us, and how that would turn out. That was the idea behind Storm, which always proved to be one step ahead of my character.

Did you have similar experiences with your skits with dogs growing up?

Not from a dog. But that’s basically what happens when you have a younger sibling, so I associate it with having a younger one.

How do you come up with ideas for your skits?

I get inspiration from different things. It could be something I saw, or what someone said. There are really many funny situations around us every day. I also saw a lot of cartoons when I was growing up, and I still do.

How does it feel to be a comedian on social media?

I really don’t feel different or special. Maybe that’s because there is still so much for me to achieve. I haven’t even scratched the surface of anything I want to do. I still wake up every day thinking about what content to create and how to get better and fulfill my potential.

Have you ever been frustrated while building your brand?

Yes. I feel like a lot of people really don’t understand how much effort I put into making my videos; from writing the script to shooting the video and editing it. I have to work at least three times like everyone else because all the things my dog ​​does in my videos are real; no special effects. It’s hard enough making videos with people; talk more to a dog.

Read also:  How I Escaped Getting Shot In A Moving 'A Chance' Bus -Victim

What are the challenges you have faced over the years?

The biggest is the lack of resources. One has to pay for props and even locations. Contrary to popular belief, you can’t just start creating content and start buying cars right away. That’s not how it works.

It’s also hard to even shoot videos in Lagos because there are always gangsters threatening to confiscate your camera if you don’t give them money. They usually claim that they are the ones watching our skits. They want us to pay them to entertain them when it should be the other way around. They assume that we (social media content creators) buy cars because they watch our videos; yet they do it for free.

Have you ever been a victim of online? bullying?

Yes I have. People have said hurtful things about me because they think that’s the way to get attention. If someone responds, they would say “I’m your biggest fan. I just wanted you to answer”.

You have more than 100,000 followers. How did you build your fan base?

It has been a gradual process. I’ve been working constantly to make sure I’m creating content at least twice a week. I’ve also gotten support from people who have more followers than me on social media. Popular music producer and record label manager, Don Jazzy, has always supported me by reposting my videos. That also helped me grow my audience. Social media personality, Tunde Ednut, has also been very supportive over the years.

Which of your videos made you famous?

I really don’t think I’m famous yet. I’m working towards it. I actually have so many things I could do.

What are the efforts you make to create your skits?

I have to work three times harder than other content creators because I am quite hands-on with my craft. We all want to be successful and come to a place where we have professionals scripting, editing and even writing, but because of the uniqueness of my content, I may never have that luxury. I have to direct the cameraman, the cast and my dog. I also need to be hands-on with whoever is editing the few times I’m not editing the content myself.

Did any of your skits get you in trouble?

Yes. Earlier this year I got in big trouble for shooting a skit while wearing a police uniform. I spent weeks with the State Bureau of Investigation and it was a horrible experience.

How did you secure your bail?

I reached out to Don Jazzy, who made some phone calls and eventually sent me money for bail.

Did the police warn you against using their uniforms in your skits?

Yes, they warned me.

Have you been told how to get permission to use police uniforms if you need them for your skits?

They told me to come to their office to meet the police commissioner who would give me permission to use the uniforms, and I would return them after I shot my skits.

What other activities are you involved in besides a comedian?

I sell furniture and also do interior decoration. I believe I am a really good cook and would like to set up eateries when I have the money. I also help people get dogs.

I’m still in the build-up phase of my career. Some money is coming in here and there, but I’m still laying the groundwork for my career.

Do you have plans to get a white-collar job in the future?

No. I believe in making money by doing what I like. I’m a very creative person, so even if I’m not doing skits, I would always like to do something where I express myself creatively.

What doors has your social media presence opened for you?

I got to meet some really important people that I might not have met without social media.

Do you get funny requests from women?

Not really. I think they are all afraid of dogs (laughs).

What are some of the testimonials you have gotten from your fans?

The most important thing is when someone said that my videos make him so happy and less depressed. That meant the world to me, because as someone who is dealing with depression myself, it felt great to be able to help someone who is facing such a challenge. His message got me through that month, knowing I’m doing something to help people.

How do you deal with negative comments on social media?

Usually I ignore them. Sometimes I block them and sometimes I react to them and give them a piece of my mind. We are all human. Just because some of us are entertainers doesn’t mean we have thicker skin.

Have you ever wished you were as popular in real life as you are on social media?

No, I can’t afford that (laughs). It’s quite expensive to be popular, so if I become a millionaire I might be easy to spot.

On your social media page you described yourself as ‘looking differently’. What do you mean exactly?

I’m a bit of an ‘over-analyzer’. I always find a twist on things. For example, there are a lot of people who make skits, so I decided to use a dog to stand out. Even when colleagues bring their scripts to me to work on, I always have an alternate ending or beginning for them.

Read also:  NBA in pictures: Agenda for the new Exco (3)

There are known cases of dogs being used for sexual romps with humans. What is your view on that?

That’s honestly the most disgusting thing I’ve ever seen. Bestiality should have no place in our society. It puts us, true dog lovers, in a bad light. There are usually responses to my posts, with people asking if it isn’t one of those “Lekki dogs.” It pains me to read such things.

What advice do you have for young talents who want to become a sketchmaker?

Do this because you really like it. Don’t do it because you see people doing it and think it’s a shortcut to easy money. This is one of the most taxing things you can choose as a career. And you should always put your best foot forward.

What sets you apart from other online comedians?

My content is different and groundbreaking. I don’t use special effects for skits involving my dogs. Even many Hollywood movies use social effects for animal scenes. Everything people see in my skits are products of creative thinking; nothing anymore.

How will you describe your childhood?

I have played and learned a lot. I was quite a stubborn kid. I did have a really nice childhood.

Were your parents helpful when you chose to be a comedian, and how did they react when they watched your skits?

I have been an orphan since I was 14 years old. I wish my parents were still alive. I know they would love what I do.

Did he ever bite anyone you worked with while shooting your dog?

No, it doesn’t. My dog ​​is one of the sweetest dogs you can find. She is not aggressive. She has a unique way of feeling fear. If she notices that a person is afraid of dogs, she would not go close to the person.

Has anyone ever refused to work with you because of your dog?

No. Initially, there were people who were really afraid of dogs. But meeting mine helps them deal with their phobia. A few people have even gone on to buy dogs after meeting mine.

What training did you give your dog to make skits with it?

It is really hard work and perseverance. I have to tell him clearly what I want him to do. I also always have to have something tasty nearby, to make shooting fun.