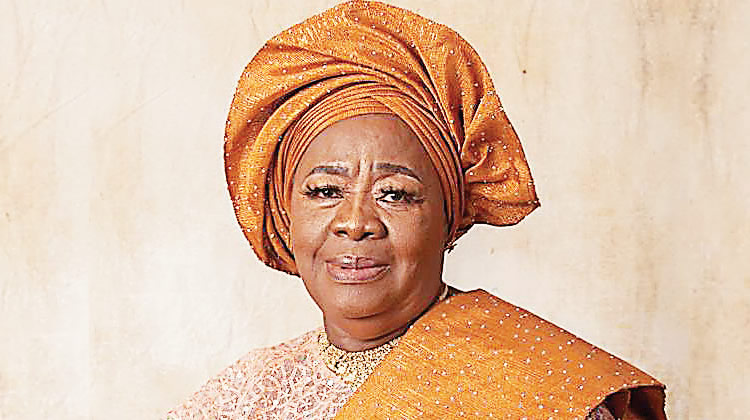 I am very happy, even though my family couldn’t celebrate much, because of this time we are in. My kids wanted to throw a party for me, but I insisted they shouldn’t. I told them that I preferred that they provide piped water to the community where I grew up in memory of my deceased parents and that they do it for me.

Can you tell us more about your background and childhood?

My father, Solomon Shodiya, and my mother, Felicia Shodiya, were both farmers. My father was strict and did not like to spend money on his children. Without his friend’s intervention, I might not have been allowed to go to school. My father didn’t want to enroll me in school, but after a lot of pressure I was enrolled anyway. His friend was one of the leaders in the Anglican Church, Orile-Ilugun. It was that man who insisted that I be enrolled. Then I was over the age limit. I was 13 years old then. My uncle had advised my father not to let me go to school because they believed that a girl would be useful not to her family, but to her husband. That’s why I told my children to supply my village with tap water to show that girls are useful.

My mother died when I was 20 years old. My father died when I was almost 30. During my childhood everything was quite difficult. My father was tough, although he was rich. He didn’t joke with his money. When I was a student, our village was quite far from the school, but I was very interested in getting an education and God blessed me with a good brain, because when I was at Olofin, I was among the top three students.

During market days, I carried goods on my head to the market square before going to school. I was in primary school in Olofin. The primary school in Olofin was then no higher than Primary Four, so if one wanted to continue studying, one had to go to Orile-Ilugun. So it was at Orile-Ilugun Primary School that I finished sixth grade and finished third.

What did you do after that?

I started looking for menial jobs after graduating, but in 1972 I got a job with Daily Print at the Ministry of Works in Abeokuta as a typist. That was when things started to get easy.

Where did you learn to type?

I learned to type at Oke-Itoku after my primary education.

Why did you learn to type?

I learned to type when there was nothing to do and suffering was too much for me. There was no money I could use to start a business at the time. So I had to go to Oke-Itoku to learn to type and finally God did.

How did you get a job at the ministry?

There was a lady I learned to type with. She was the one who took me to the Ministry of Works. I could speak English, so I got a job there as a casual worker. And you know that as a casual worker you can be fired at any time and in any way. A friend of mine took me to Ibadan to ask her boss if I could be offered a job and when we got there we were told there was no vacancy in the Ministry of Works, Eleyele, in Ibadan. After much persuasion, her boss, who was a permanent secretary, contacted his colleague in various ministries and I later got a job in the Ministry of Facilities. I initially got 16 kobo but later received 48 kobo in the second month. My husband joined First Bank in Lagos.

Did you and your husband live separately?

Yes. But later, an in-laws who were the chief accountant of the Federal Treasury Department said he didn’t want me and my husband to be separated. So one day he asked me to come. He told me to report to the Federal Inland Revenue Service in Lagos from Ibadan where I worked. I did not immediately report to the FIRS in Lagos. I joined after I passed an exam. At the time, I was not interested in the job because the responsibility was too much. My kids had already been admitted to college so I did menial jobs and got contracts while serving the administration of (a former Lagos state governor, the late Lateef) Jakande and I also had a company on Mile 2.

How did you meet your husband?

When I was in second grade, my husband was transferred to our village. He was a teacher at the time, but we didn’t go out because I was too young. He left our village to do a course. Then he met one of my brothers in Abeokuta and asked about me. My brother told him I was in Abeokuta. There was one day we saw each other at Ake and that’s how we started. We waited until I finished Modern 3 (before I got married). I was 23 years old when we later saw each other and got married.

How old was your husband then?

He was 29 years old when we got married and I was 23 years old then.

Did you always like him when he was your teacher?

What attracted me to him was the fact that he was educated and young and that my father liked him then. At that time he was friendly, but now he is hostile to me and I think it is because of old age.

My father asked for kola nuts and a bottle of gin and he prayed for us.

Teachers were highly respected back then. Did you consider yourself lucky to marry one?

It was very helpful, especially in raising our children. My husband always helped our kids with their schoolwork and made sure they finished their homework before he got back from work. I’m glad I married a teacher.

What is your view on virginity?

It is quite difficult for female children because there are many immoral activities happening these days. Did you know that in my day some men used charms on girls to break their virginity? Then when a woman married and her husband did not meet her as a virgin, people labeled her an indecent girl.

How do you compare that as someone who grew up in the village with life in the city?

Life in the city is better, because hard work doesn’t make you rich in the village. Some people in the village have money but don’t spend it to get a good life. I remember as a child getting water to drink from a river where the villagers also washed and bathed. The water didn’t kill us then, it made us stronger. Rural communities need good monitoring. They just have councilors who only visit the villagers when the elections are just around the corner. The government does not take care of the people.

What was the security like in the villages then?

Security was good at the time. There was nothing to be afraid of. I told you where I went to school was far from my home. I left my house at about 5 or 6 in the morning and I went back home in the evenings around 7 pm and didn’t get home until about 9:30 pm or 10 pm. People can’t walk around late these days.

Were crimes like rape and cultism widespread at the time?

There was nothing like rape and cultism in those days. The issue of sex-for-marks was common then. I remember one year there was a teacher I suspected because of the way he behaved towards me. I told my father’s friend when I got home and the teacher was summoned by the community. During that period, some teachers were notorious for impregnating female students. But any teacher caught in the act was fired.

The first was when my first and second children were accepted into college. I was still with the FIRS at the time. I was very happy. A man who was also a teacher at the same school as my husband helped us with the admission letters. I was very happy the day we picked up the letters. I had to take out a loan from a bank, which I gave to my daughter to let her go to school. The second happiest moment was the day my first child traveled to the United States of America. I was surprised that something like this could happen in my life. The third was when I traveled to the US, Canada and Jerusalem. Life in those countries is very different. They are better off there than we are here. Things are going well there, but things are different here.

You said earlier that your father was strict. What is your parenting style?

I am a bit strict because my father was strict. God has helped me to raise my children. There was then one of my friends, who is now deceased, her child behaved badly.

What was your biggest challenge as a parent?

My biggest problem as a parent was that I didn’t have enough money to spend on my children if they did well in school. But I had good friends who helped me a lot. One of my friends we called Iya Lola gave me N50,000 in 1999 for my son’s trip to the US. She lent me the money.

What do you consider to be some of the best virtues you have instilled in your children?

I instilled in them the fear of God and I also taught them to be content with what they have. I have five children and they are all college graduates and they also have master’s degrees.

They must have followed me, because I don’t joke with prayers. In Lagos I attended a fellowship and was appointed as a women’s leader. I told them I did not have the means to serve in that capacity, but I partially accepted.

How have you found a balance between family activities and Church activities?

They didn’t clash because God gave me grace. I always contribute to the church, even if it is only a little.

I don’t address the church or preach. I’m just going to worship and listen to the word of God. I don’t like to be noticed when I’m doing something in church. I like to work behind the scenes.

No, I have no regrets at all.

What is your greatest motivation and inspiration?

I don’t like being stuck in one position and I like doing things that make me money until old age catches up with me.

What are you most grateful to God for?

I am thankful to God that He has blessed me with my children.

How did you manage to stay healthy and glowing at age 80?

God has helped me to manage my health and my children take good care of me too.

PDP may set up campaign committee next week

PDP may set up campaign committee next week