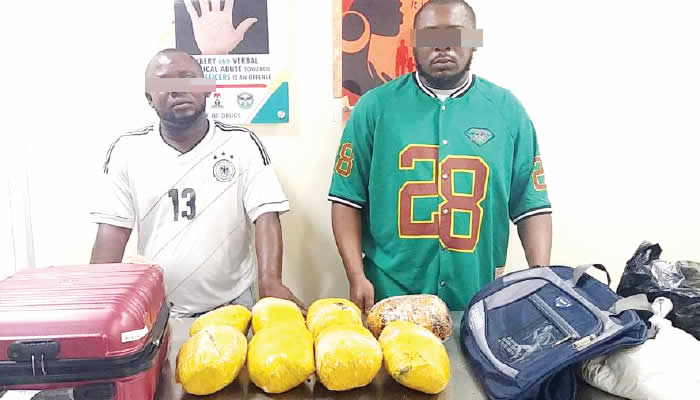 The National Drug Law Enforcement Agency on Sunday confirmed the arrest of a cleaner, Sunday Ohiagu, for running a drug syndicate at the international wing of the Murtala Muhammed International Airport, in the Ikeja area of ​​Lagos state.

The agency’s spokesman, Femi Babafemi, said in a statement that Ohiagu was arrested on Tuesday after the arrest of a passenger on his way to Dubai, Obinna Osita.

Babafemi said Osita was arrested along with another member of the airport syndicate who worked with Ohiagu.

The statement read in part: “Investigations have revealed that a Dubai-based drug dealer recruited Osita, 42, a resident of Oyi Local Government Area, Anambra State, to deal in the drugs and also Ohiagu, 34, an airport cleaner from Orlu West Local , has contracted Imo State Government Area, to provide access for the unimpeded passage of the trafficker.”

“The arrest of the drug syndicate, the first drug arrest in the new terminal of the MMIA, comes on the heels of the seizure of a shipment of bottles of Viju and intrepid energy drinks used to hide skunk from export to Dubai, UAE, via the NAHCO export warehouse on Monday 15 August.

“A freight agent has already been arrested in connection with the seizure.”

In a similar vein, Babafemi said an attempt by a syndicate to export illegal drugs through Lagos airport on Wednesday, Aug. 24 was thwarted during a passenger clearance clearance from Ethiopian Airline to Oman via Addis Ababa.

“A suspect, Jonah Chukwuemeka, was arrested with a total of 1,995 Tramadol tablets, with a gross weight of 900 grams hidden in carob beans in his luggage. The bag containing the illegal substance was handed to him at the airport by one Abbas Olagunju, who was promptly arrested.”

Babfemi said: “Efforts are underway to track down the car dealer, Alhaji Ismail, who is currently at large.”