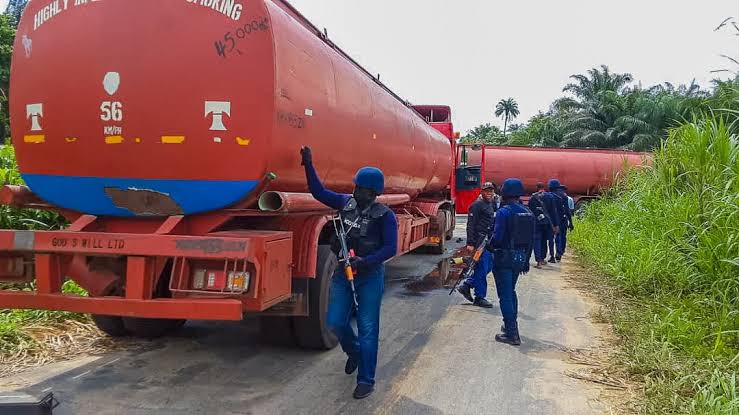 The National Security and Civil Defense Corps in Delta State has arrested four bunker-type suspects, while six tankers and articulated trucks loaded with stolen illegally refined petroleum products suspected of being automated gasoline oil have been seized from the suspects.

This was stated in a statement by Emeka Okwechime, the Command’s public relations officer, copies of which were made available to journalists in Warri on Wednesday.

According to the statement, men from the NSCDC’s Special Intelligence Squad broke through the secret charging point on the Odorubu waterfront in the state’s Patani Local Government Area.

The agency explained that the suspected vandals used a tanker truck to barricade the only road leading to the illegal charging point to prevent security officers from gaining access.

The statement read in part: “The officers enlisted the help of six truck drivers, two auto electricians and a tow truck, who towed away the heavily loaded 120-litre truck used by the crude oil thieves to open the way to the illegal to barricade cargo. period”.

“The four suspects were arrested in a separate operation in Warri with a Toyota Camry blue car, license plate BMA 786 TN and a Toyota Sienna, license plate KSF 107 CD, both loaded with illegally refined petroleum product suspected of being AGO hidden in 25 -litre polyethylene bags numbering approximately 300 bags.”

The statement listed the names of the suspects as Clement Mike, 34, Tobore Morgan, 39, Chinwe Ikpeamachukwu, 40, and Jeff Oluchi, 29, now free.

It explained that the suspects are currently under investigation and would be brought to court accordingly to deter others.