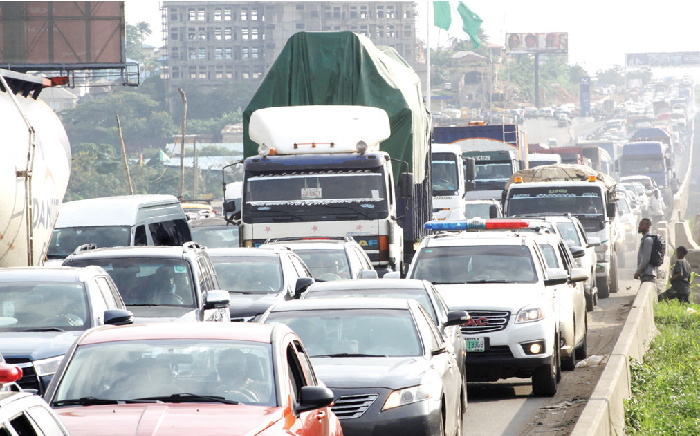 Three unidentified people were killed on Sunday in an accident that injured four others in Oniworo, along the Lagos Ibadan Expressway.

Okpe said: “Nine people were involved in the crash, three died while four others were injured.

“The suspected causes of the crash were a tire blowout and speeding by the Toyota Matrix driver who lost control of the wheels after a tire burst and rammed into a truck.

“The injured victims were taken to Victory Hospital, Ogere, for medical care, while the bodies were deposited at FOS Morgue in Isara.”

PUNCH Metro concluded that the accident occurred as hundreds of motorists and commuters were trapped for hours in the stalemate caused by ongoing construction around the end of the Otedola Bridge of the Lagos-Ibadan Expressway.

One of our correspondents monitoring the situation along the highway noted that the traffic jam had caused motorists to increase transport fares from Berger to Magboro, Mowe, Ibafo, among others in Ogun state.

A passenger, who did not give her name for security reasons, complained that she had spent hours in the deadlock.

She said: “This construction doesn’t help at all, how many hours do we have to spend in this traffic? All these bus drivers don’t even want to step into our shoes; they just raise the prices.”

A businessman from Oyo state, Temidayo Olawale, stated that the road barrier was responsible for the heavy traffic.

He said: ‘When we got to the Warewa bus stop, the driver took one direction because the traffic on the bridge was not moving at all. There was a narrow place that only one vehicle could enter at a time, that place was also blocked.

“Motorists from Lagos, who tried to turn around at the Fatgbems bus stop, also contributed to the traffic. I came from Oyo State, I arrived in Warewa around 12 noon, I got to a point close to the dividing line and I spent three hours there.

A commuter, Tosin Omojola, said: NAN that the situation on the road was worrisome, as the contractor was insensitive to the plight of road users.

She said: ‘The stalemate could be avoided if Julius Berger had done the necessary. The problem is they don’t mind the hours we waste on the road. The road should have been made passable before they split it in two.

“I had to go from Berger to Magboro for four hours on Friday night; it was such a difficult time.”

Lagos State Acting Federal Work Supervisor, Forosola Oloyede, appealed in a statement to all road users on Saturday, adding that adequate facilities would be in place for traffic management.

She said: “The government therefore wants to call on the cooperation of all road users with the contractor and traffic controllers to allow free flow of traffic at all times, even while reconstruction works are underway.

“There is also a provision for tow trucks along the road in the event of a breakdown. Road users must be patient by not driving against traffic and obeying the stationed traffic controllers to allow free flow of traffic.”